Staying at Dolphin Square, you’ll be within easy reach of London’s finest bars and restaurants.
Local restaurants offer a range of international cuisine, whilst nearby Westminster, Chelsea and the West End will leave you spoilt for choice.

With an array of traditional pubs, stylish gastropubs and lively bars in the area, you’ll be able to take full advantage of London’s sparkling nightlife without having to worry about a long journey home.  They say that food is the ingredient that binds us together and fortunately for us, Pimlico is a hub for all things food, with dozens of restaurants and cafés so we’re never short of choice.

There is an abundance of international flavour within walking distance of Dolphin Square.  Let's take you on foodie tour of some of the British, European and International culinary feasts of Pimlico.

Here are some recommendations to get you started…

For those wanting to dig deeper into the culinary delights that Pimlico has to offer we've explored the local eateries in more detail below:

About: Goya, a Spanish restaurant with a reputation for generous, well-prepared tapas.  You don’t have to walk far to find the finest flavours of Spanish Tapas here in the capital, and at Dolphin Square, we’re lucky enough to have the likes of Goya on our doorstep. Specialists in delivering authentic, flavoursome and relaxed dishes, Goya is celebrated for it’s lively atmosphere, fuelled by hearty traditional dishes, from Patatas Bravas and Croquetas de Pollo, to aromatic Arroz al Azafran.

About: Uno on Denbigh Street is a busy, modern trattoria serving well-priced pizzas and pasta. 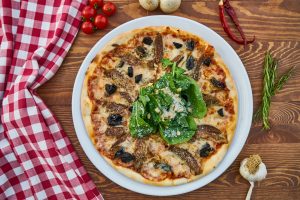 About: Family-run Enoteca Turi is situated on the picturesque Pimlico Road, and boasts a menu brimming with flavour-packed dishes inspired by regional Italian cuisine, sprucing up traditional methods of cooking to fit with the contemporary London restaurant scene. In fact, many of the ingredients used in their dishes are rarely seen outside of Italy. Try the Risocotto di Zucca Delica, a rich risotto with Delica pumpkin, dolcelatte, grape mustard and rosemary.

About: La Poule au Pot on Ebury Street is one of London’s most intimate and romantic restaurants.

About: If you want authenticity, and a whole lot of history, pay Grumbles a visit – a long-standing local bistro with rustic wooden boots, Parisian street signs and an illustrious past. Celebrating over 50 years of service, Grumbles opened its doors in 1964, and hasn’t changed since. Grumbles’ founder, Jeremy Friend, wanted diners to feel like they were joining him for dinner in his own home, and now, the restaurant has a loyal, global following.

About: Kazan on Wilton Street offers a fine range of Turkish cuisine and mezze.

About: Kym’s – also on Wilton Street – is a favourite of politicians drawn by the excellent, traditional Cantonese fare.

About: Lovers of Japanese food may already be aware of the Ichi-Riki Sushi House, located on Strutton Ground near New Scotland Yard and serving some of the finest, freshest sushi and sashimi in town.

About: True to its namesake Lorne encompasses a classic Australian vibe. For starters, its overall aesthetic pleases the eye with calm, washed-out blues and greys. There's even a sprinkle of millennial-loved marble here and there which is complimented with natural-wooden furniture. The restaurant is made to feel even more personal with hand-crafted pottery and artwork. Despite the Australian interior influences the food professes itself to be typically British and European adapting seamlessly with the season. Current dishes include autumn warming venison and hearty pork belly. Chef Peter Hall, endowed with experience at San Francisco's three Michelin-starred restaurant Benu, opts for native produce but the search wanders further afield for exotica touches to dishes.

About: A neighbour of Lorne is quaint yet high-end bistro About Thyme. Although small in size it's big in flavour. White-washed brick walls and gilded mirrors create a sophisticated atmosphere with tables dressed simply, in white cloth and candles. As well as boasting British classics, with the majority of produce sourced in the British Isles, the menu showcases a Spanish influence. Welsh Lamb Shank and Presa Iberica, despite a fusion of cultures, both comfortably feature on the menu. The restaurant does also work with selected small Spanish businesses to perfect this amalgam, and above all freshness and quality of produce comes first.

About: What once was an old Dickensian pub, Artists Residence Hotel, tucked amidst the streets of SW1, houses one of the area’s most sought after and vibrant eateries - The Cambridge Street Kitchen. Before tucking into a plethora of plates and dishes, guests feast their eyes on the delicious decor. Copper finishes, walls adorned with brightly painted artwork and even a florescent yolk-coloured neon sign that hangs above the kitchen, after all ‘this is where the magic happens’. For breakfast, lunch, dinner or just a coffee you can get comfy and enjoy the seasonal menu which incorporates the best of British ingredients, they champion British produce wherever possible. And whether you go for a sirloin or cod there is always a wine recommendation to be paired with each dish.   Championing British producers wherever possible, brightly bedecked Cambridge Street Kitchen is open all day, but dinners are best. Changing monthly, seasonal menus include treats like duck breast beside pickled cherries and gingerbread, or sirloin steak served with broccoli, malted shiitake mushrooms and smoked anchovy butter – plus a suggested wine or ale pairing in every case. 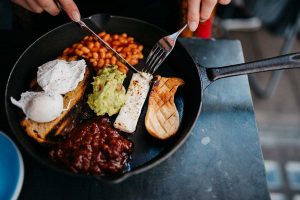 Before all that though, begin by sipping a Passport to Pimlico (gin, hibiscus, elderflower, dry Curacao, sparkling wine) in the low-lit, speakeasy-style Clarendon Cocktail Cellar, and enquire about this building’s history as a Victorian pub of, well, dubious character.

About: For a complete contrast, the Rex Whistler Restaurant at Tate Britain, offers the best of British flavours with an occasional international twist.

About: The Goring Restaurant in Beeston Place on the doorstep of Buckingham Palace is always filled with public figures and recognisable faces.

About: Boisdale of Belgravia is a fine Scottish restaurant famous for its ‘full and frank’ wine and whisky lists and for the quality of the 28-day matured beef. Featuring what some say is the best steak in London, the menu also boasts a range of authentic Scottish flavours including haggis, salmon and game, and there is nightly live music in the late licensed Macdonald Bar.

About: Dolphin Square’s proximity to Victoria Station means that residents can enjoy a sophisticated day trip topped off by a sumptuous four-course meal on the British Pullman, a sister train of the Orient Express. The food and service is excellent, with the added bonus of visiting some of Britain’s most beautiful towns and attractions including Bath, Cambridge, Canterbury, Blenheim Palace and Chatsworth House.

The pick of Pimlico brunches

There's nothing better than a lie-in to kickstart the weekend, rolling out of bed mid-morning in search of a caffeine fix and a remedy to tame the stomach rumbles. Come rain or shine, we've become a nation infatuated by brunches, biting at the bit to get our weekly dose of eggs sunny side up, served picture perfectly next to the green stuff on a bed of sourdough or granary.
To ensure you’re not missing out, we’ve created our very own menu of The pick of the Pimlico brunches.

About: Chic on the outside, chic on the inside; this hotspot on the corner of Cambridge Street was once a “Victorian Boozer”. Now part of the Artists Residence group of hotels, their ever-changing seasonal menu encompasses everything brunch should be. From the classic, Eggs Benedict to the ‘Skillet’ with a King Oyster, this is the ideal hub with an array of offerings.

About: Half way between Pimlico and Victoria, No. 11 Pimlico Road is spacious, bright and incredibly relaxing. With seating so comfy you’ll never want to move – and after indulging in their perfectly curated menu, you probably can’t. We recommend the Breakfast Sourdough Bruschetta. You can thank us later.

About: A little less restaurant, a little more café, sitting in Pimlico Fresh feels like being in the hub of the neighbourhood. Perfect for a natter and a catch-up with the company of your choice, if a plate full isn’t for you, perhaps one of their homemade smoothie’s might be. However, we would say the classic avocado and eggs on toast are served up with intention to be devoured.

About: With a clue in the name, coffee is their thing. Offering beans and blends of fair trade and ethical from around the world, The Roasting will kick-start your weekend with their Italian flair. With a side of toastie or a croissant, you’ll feel perfectly content watching the world go by; from a seat in their windows or, a table outside.

What about trying your hand at making your own breakfast? After collecting all the ingredients you need from one of the local supermarkets, swing by Gail’s Bakery to pick up a freshly baked loaf of bread, which will be the pièce de résistance.  Why not tweet us your pictures, and show of your masterpieces.

When the afternoon is long and the weather is sunny, al-fresco dining has never been more appealing, so we've sourced the best Alfresco Dining in Pimlico for you to kick back, relax and catch a few rays.

Check out this stylish cafe with outside tables and daily changing blackboard menu for a selection of paninis and summer salads. This local deli-come-cafe is a popular haunt amongst residents so make sure you get there early to bag your table outside!

This popular farm shop is one of our favourites for a deliciously organic, alfresco breakfast. This is a great spot to "people watch" in the buzzy Pimlico Square whilst sipping on a delicious freshly squeezed juice.

Nestled in the corner of Pimlico Square, with intimate nooks and festoons of dried flowers, La Poule au Pot is considered to be one of the most romantic restaurants in London. We would recommend reserving one of the outside tables (attired in starched linen!) for a romantic evening meal where you will feast on delicious French cuisine in the paved haven of Pimlico Square.

A firm favourite amongst locals as well as London's more discerning diners, this modern Italian restaurant has a refined feel and offers the ideal outside space for a leisurely lunch in the sun.

We’ve gone on a hunt to whittle down the crème de la crème of Pimlico’s top cupcake offerings.

Peggy Porschen is one of the most instagram-worthy locations in London right now, and its cupcakes have gained somewhat of a celebrity status. With exquisite decoration and elegant packaging, these edible works of art are the gift that keep on giving. 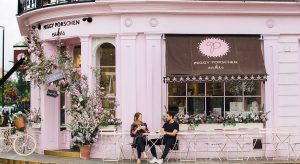 Lola’s Cupcakes, dotted around London is the perfect stop-off for a treat. Located in Victoria Station, the range of sizeable cupcakes to miniature cupcakes allow you to indulge as little or as much as you wish. Be it buying a box for the office, or just for yourself (no-one is judging here) their takeaway deals are too good to miss, especially the red velvet selection!